May 22, 2016
Me hearties,
Let us plunder and pil..
Sorry, wrong blog.
Ahem.
Hey all,
Its been a while. Been busy at work as usual, and haven’t really had much time to write much. As penance, I will post not one but two updates!
This particular post is in relation to Raspberry Pi users specifically. I had earlier talked about the vagaries involved in emulating SPI over GPIO in order to get an additional SPI peripheral. It was a moderately involved process, but the rewards were great

With the most recent release of the Raspbian Jessie distribution (2016-05-10), a number of improvements have been made to both the desktop parts and the “under-the-hood” parts, perhaps most significantly the kernel. This new release uses Kernel version 4.4, which now adds the ability to use the second hardware SPI peripheral, SPI1, on the Raspberry Pi. This is only available to devices with the 40-pin header (as seen from the title of this post) so users of the original model A and B will probably need to turn to spi-gpio should they need an additional SPI peripheral. This post aims to explain how to get SPI1 operational on the boards listed above.
Enabling SPI1 is done using the Device Tree overlay method, which involves editing the /boot/config.txt file and adding a dtoverlay=xxxxxxx line/directive in there. However, the SPI1 peripheral apparently is capable of using 1, 2 or 3 chip select lines, so the particular overlay to be loaded depends on how many chip select lines you want. In most cases, you probably want a single chip select line so our dtoverlay directive will look like this:
dtoverlay=spi1-1cs
This will load the overlay giving us one chip select. And that’s it – no need to modify /etc/modules or anything like that. In fact, I didn’t even bother enabling SPI0, just this one, which means SPI0 and SPI1 can operate entirely independently of each other. Possibly raspi-config will someday be updated to support enabling SPI1 without having to edit /boot/config.txt directly. Once I rebooted, I now had a /dev/spidev1.0 file, corresponding to my newly-enabled SPI1 module.
The SPI1 pins are as follows (this page has a lovely pinout):
GPIO20 (Pin Header Number 38) – MOSI
GPIO19 (Pin Header Number 35) – MISO
GPIO21 (Pin Header Number 40) – SCLK
GPIO18 (Pin Header Number 12) – CE0
If you had wanted two chip selects, then the dtoverlay directive would have looked like this:
dtoverlay=spi1-2cs
This would let us use two chip select lines, where the first chip select line CE0 would be GPIO18 as above, and the second would be GPIO17 (Pin Header Number 11). For three chip selects the directive may be modified to become dtoverlay=spi1-3cs, where the third chip select line would be GPIO16 (Pin Header Number 36). Note that these are the default chip select lines used, but they can be re-routed to other GPIOs if they are not convenient. To do this, the dtoverlay directive would be modified to specify the particular GPIO (BCM numbers only, not pin header numbers!) as needed. For instance, to re-route the only chip select line used for the spi1-1cs overlay from GPIO18 to GPIO23 (Pin Header Number 16) , the directive would become:
dtoverlay=spi1-1cs,cs0_pin=23
For the other chip select combinations, similar parameters (cs0_pin, cs1_pin, cs2_pin) may be used. For more information, visit this page. Although I’ve not tested this, it is probably possible to specify these values on demand. For instance, if you were using three chip select lines and you only wanted to specify a different CE1 (leaving CE0 and CE2 at their default values) then your dtoverlay directive would probably look like this:
dtoverlay=spi1-3cs,cs1_pin=23
But as this is untested, I would not bet my life’s savings on it.
I also wanted to see how well SPI1 performed as opposed to the spi-gpio version I’d tested earlier. I know, it seems silly: software emulation/bitbanging is rarely ever a match for a hardware peripheral, but I like to think I’m a scientist at heart

. So I fired up the logic analyzer and used a simple bash command (echo b > /dev/spidev1.0), then captured a couple of samples at a 1M sampling rate. The resulting traces are shown below: 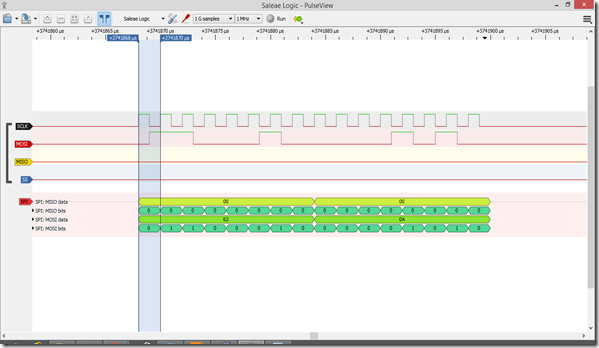 Gosh, look how precise those clock edges are! The spi-gpio version didn’t look nearly so sexy, but it worked. 62 in hex is 98 in decimal, corresponding to the ASCII code for ‘b’. The 0A is likely the linefeed (LF) from the terminal. Here’s another one, this time showing the period of the SCLK pulses: 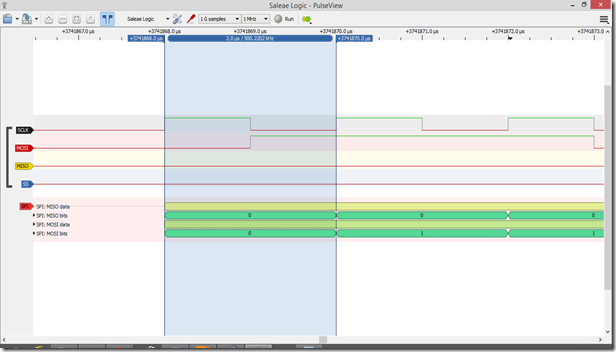 According to Pulseview, the clock pulses have a frequency of 500KHz, which is not too shabby. I expect that it supports higher speeds when properly configured so I wouldn’t worry too much about it. Oddly, I did notice a couple of glitches on the MISO line, seen below: 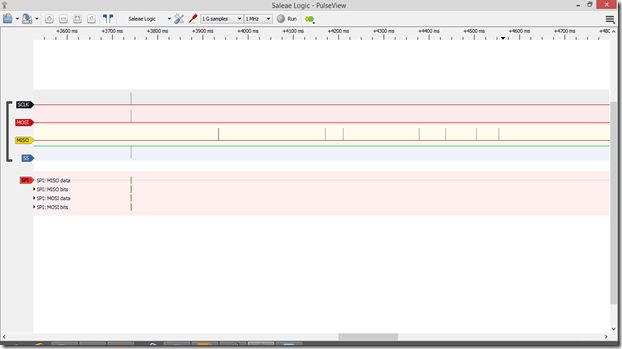 They’re the little spikes on the third line. My hypothesis is, since that line (Master In Slave Out) isn’t actually being driven by another peripheral (the Pi is connected to the Logic analyzer directly), there are tiny ‘noisy’ pulses that appear. If there was an actual element driving the line, that would probably not happen. Most importantly, when an actual SPI transaction is taking place (characterized by the chip/slave select line going low) the MISO line remains low throughout, so I don’t think this would be a problem.
So, if you have need of a second SPI peripheral, upgrade to the latest Raspbian and enjoy the goodness of hardware SPI. I can see how this would apply for using touchscreen devices (based on the ADS7846 chip) and other high-throughput devices (like nRF24L01+ radios or even ENC28J60 modules) simultaneously. Granted, some tweaking is needed, but that’s part of the fun innit?

Edit: For Pi 3 users, here's a thread on the Raspi forum that may be of some interest..

Popular posts from this blog 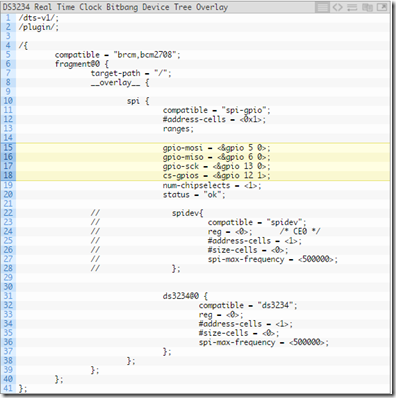 Hello all and happy holidays to everyone! I’m taking a break off work for the holidays so I have a little bit of time on my hands. I will therefore regale you with tales of my exploits! From my last post, I talked about the somewhat “edge” case where you’d want to add (cheap) Ethernet to a Raspberry Pi, probably the A+ or Zero as the case may be. I haven’t figured out the fixed MAC thing just yet, but I’m working on it. Anyways, after some time, another edge-edge case came to me: The ENC28J60 takes up the only SPI peripheral available on the Pi, so what if you needed to use both the ENC28J60 AND some other SPI device? The Pi’s SPI peripheral has two chip selects, so it is theoretically possible to use the exact same bus while using the first chip select for the ENC28J60 (which it uses by default) and using the second chip select for the other device. However, it goes without saying that network communications require some serious computing firepower so it might cause a bit of a perfo
Read more

Getting Started with Logic Analyzers and Pulseview 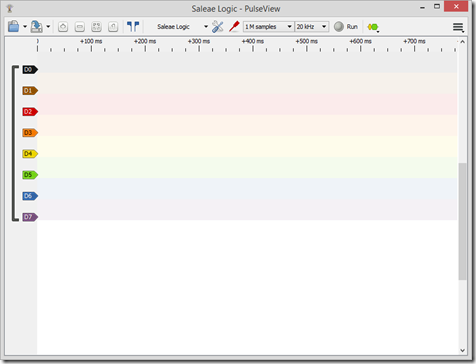 Hey all, Been a while. Hope you’ve been up to no good, hm? A couple of days ago, I had to do some low-level I2C work on a bare-metal ATMega328P. Digging out the datasheet, I cobbled a simple I2C driver together, the purpose of which was to permit me write a driver for the particular peripheral which would call the lower-level functions the driver provided (i.e things like i2c_start(), i2c_stop(), i2c_address(), etc etc). When I finished the I2C driver, I tested it out with an MMA8452Q I had lying about and it seemed to work just fine. Believing everything to be dandy, I went ahead and wrote the peripheral driver for the component I was working with. And that was when the funny stuff started. To cut that long story short, it wouldn’t work right when deployed to the hardware. At all. I was in a bit of a bind – the code looked great, no errors no nothing, so it was time to look at the hardware/wire-level end of things. Logic analyzers (in my limited understanding) are tools/instrume
Read more